Common Types of Iguanas in Florida 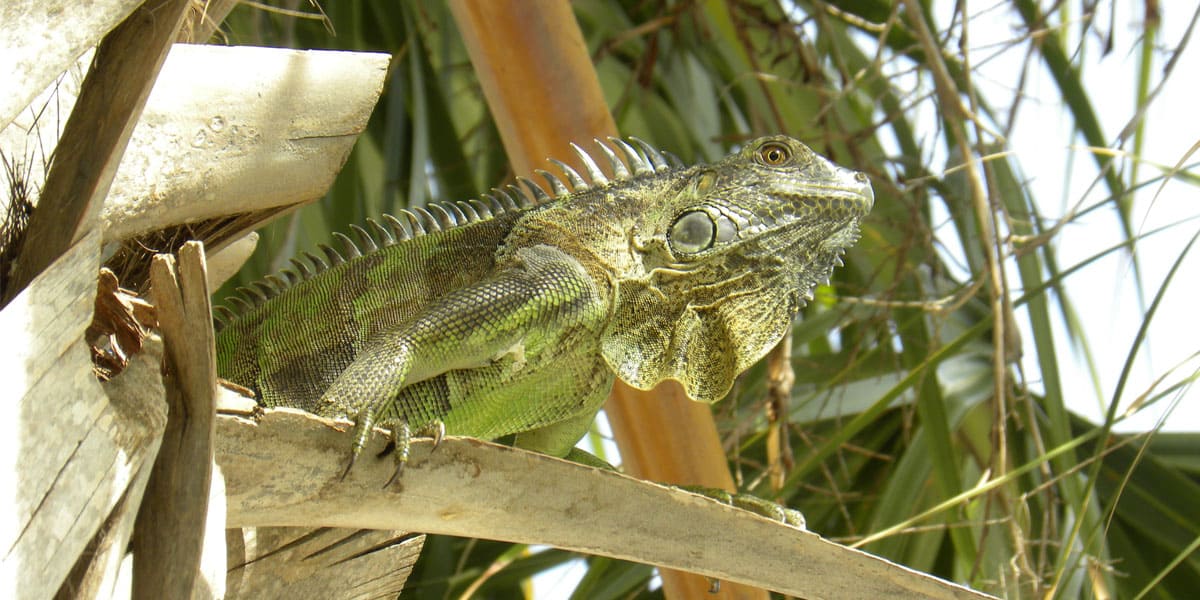 What would you say if I told you scientists found 3,169 lizards between Lake Okeechobee and Key West?

If you own a home in southern Florida, you’re not surprised.

The number of iguanas keeps climbing and climbing. Invasive iguana species cause migraines for homeowners and business owners across Florida.

Keep reading for everything a homeowner needs to know about the types of iguanas in Florida.

Green iguanas look like a typical lizard but don’t take their name for granted. These lizards come in brown, black, pink, and orange during different seasons. Young iguanas and hatchlings will have the standard bright green colors.

You’ll often find green iguanas living in shrubs or trees. You will find them everywhere in Florida – from small towns to urban areas. Iguanas excel at swimming, and they can submerge underwater for up to twenty minutes.

You can spot a green iguana by looking for rows of spikes that go down the center of their spine and up the tail. You will see black rings, also.

The males can be over five feet long and weigh up to 20 pounds, while the females do not get larger than around 7 pounds. Green iguana mating season is October through November. Females dig a labyrinth underground to hide somewhere between 14-30 eggs.

For green iguanas in the wild, their average life expectancy is ten years. For the domesticated variety, they can expect to live around 20 years.

Green iguanas are large and in charge in Florida. The overpopulation causes the majority of homeowner migraines.

Here’s a pro tip: there’s a list of plants they hate that can help keep them out of your yard.

Don’t rule out seeing a green iguana as far north as Alachua. Reports of iguanas further north tend to be pets who escaped their homes.

The other two species cause significant damage. But, they represent less of the population of Florida iguanas.

It’s difficult to tell a black spinytail from a Mexican spinytail iguana. You need to pay attention to detail.

This iguana has either no scale, one scale, or two scales. There’s a separation at the short crest between their back and tail. Look for two rows of scales.

They’re best-known for having dark bands across their body.

The black spinytail loves the heat in the Sunshine State. This invasive species came from the driest environments in Mexico and Central America. These lizards love to burrow and nest in environments like southern Florida.

Adult male black spinytail iguanas grow to around 4 feet in length. Both sexes tend to be between 2.5 pounds to 4.5 pounds. You can identify a male by the orange color around its head and throat during the breeding season.

They are not fans of people and will dash away to their burrows when sighted. If they can’t reach their home, they climb as fast as they can run. Black spinytails also love rocky environments and will cuddle under one to nap.

They are not as common as green iguanas, but they cause their fair share of trouble. The Florida Fish and Wildlife Conservation Commission reports breeding for over ten years.

The farther north you are, the less likely you are to find them. Most sightings come from three counties in southern Florida: Dade, Lee, and Charlotte. Don’t rule out spotting one of these iguanas on the east coast, either.

This species of lizard gets its name from the ridged scales that run down their tails. A Mexican spinytail will be brown or grey-brown with a yellow belly. If you manage to find a young one, they transition from olive-green to tan to gray to black as they enter adulthood.

This invasive species also came from southern Mexico and Central America. Southern Florida has more incidents for this iguana, also. It’s the perfect environment for any lizard.

Male and female Mexican spinytails will reach up to 4 feet in length. Mexican spinytail females also burrow underground to hide their eggs. They will protect the nest, once the babies hatch, they are on their own.

These iguanas eat plants like flowers or they find fruit. They are omnivores who will snatch a small animal’s eggs.

Most “invasive species” of iguanas came to the United States as pets in the 1970s. Homeowners released them, and they’ve thrived ever since. Scientists study these iguanas from Miami-Date to Key West because they’re so populous.

Impact of Iguanas on Homeowners

Floridians also report damage to infrastructure from the iguanas. When they burrow underground they collapse foundations, sidewalks, and seawalls.

Iguanas have become so common that they’re famous for falling from trees!

Florida homeowners should look for burrow holes on their property. Looking under landscaping rocks or in the trees make sense, also. You may even find an iguana sunbathing on a rock in your backyard one morning!

What Can I Do About All Types of Iguanas on My Property?

Are you feeling shy? Bookmark our blog and come back to learn more!

Ready To Get Started?

We're ready to answer all of your questions regarding your iguana control needs.